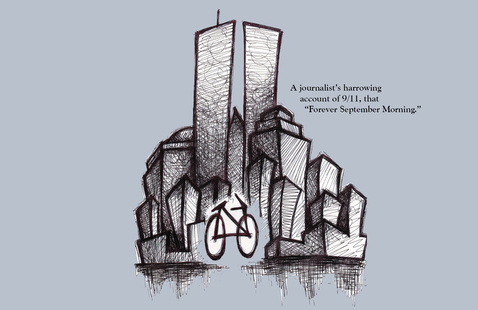 The Allegheny Playshop Theatre opens its 91st season with Thomas F. Flynn’s Bikeman, a theatricalized staging of Flynn’s extraordinary poems documenting his firsthand experience of September 11, 2001. Bikeman is directed by Mark Cosdon and will be presented in the Gladys Mullenix Black Theatre in the Vukovich Center for Communication Arts Friday and Saturday, September 10-11, at 8:00 p.m. and at 2:30 p.m. on Sunday, September 12. The production commemorates the twentieth anniversary of the tragedy. Bikeman is free with seating assigned on a first-come basis. All audience members must be masked for the duration of the hour-long performance.

Tom Flynn was a writer and producer at CBS News for over 25 years. On September 11th, Flynn rode his bike to the World Trade Center in order to begin filing reports from the site. Quickly, Flynn moved from being a reporter and neutral observer standing apart from the event to a participant, survivor, and defining chronicler of that fateful day. Subsequently, he published Bikeman: An Epic Poem, an account of his experiences on that “Forever September Morning.”

Cosdon and six performers developed the expressive language and gripping imagery of Flynn’s Bikeman into a theatrical production. Using the power of language, the audience is taken through Flynn’s experience, guided by the storytellers. The actors reach back to the roots of drama using a chorus to convey an enormously painful and important story. Company members include Safiatou Compaore, Barry Crentsil, Matthew Dugan, Karen Gauriloff, alex martin, and Victoria Smith. The stage manager is Tully Taylor. Costumes are designed by Miriam Patterson and the lighting/scenic designer is Michael Mehler. The sound and projections are by Heather Curtis, with technical direction by LeeAnn Yeckley. Director Mark Cosdon believes Bikeman “captures the terror and the humanity and the power of that day.”

Tom Flynn was a founding member of “48 Hours,” an investigative producer for the “CBS Evening News with Dan Rather” and a producer at “60 Minutes” for Steve Kroft. For many years he wrote and produced for “Dan Rather Reports.” Flynn will be visiting several classrooms September 11th-14th to engage Allegheny students in conversations about the field of journalism, 9/11 and its legacy, and the importance of communicating history. He will also participate in post-show discussions following the Saturday and Sunday performances of Bikeman.