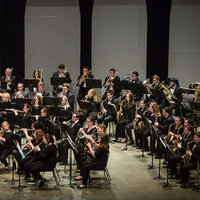 The Allegheny College Wind Symphony and Wind Ensemble will present its 2019 fall concert on Sunday, November 24, at 3:15 p.m. in Shafer Auditorium on the Allegheny College campus.  Admission is free of charge.  The ensemble is under the direction of Dr. Lowell Hepler, professor of music. Pre-concert music will be provided in the Campus Center lobby by the Flute Ensemble, directed by Bronwell Bond.

The Wind Symphony is an 85-member symphonic band; membership is open by audition to all Allegheny College students. Wind Symphony students have been honored at the state level through acceptance to the Pennsylvania Intercollegiate Band, and the national level through acceptance to the National Small College Intercollegiate Band, and the National Wind Ensemble at Carnegie Hall.

Sunday’s program promises music for a wide variety of tastes. It opens with “Celebration Fanfare” by James Curnow, followed by one of the pillars of band literature, the “Second Suite in F for Military Band” by Gustav Holst. Another multi-movement work on the program is Balmages’ “Elements,” a four-movement work inspired by the four ancient elements of air, water, earth and fire. Also on the program is “The Journey Home” by Andrew Boysen, “Sarabande and Polks” by Malcolm Arnold, and “Deadline” by Ryan Nowlin. The concert will conclude with Julius Fucik’s “Florentiner March.”

Lowell Hepler is professor of music and director of bands at Allegheny College.  He has served as guest conductor for music festivals ranging from the county through all-state levels. Hepler was principal tuba with the Erie Philharmonic for 35 years and served as principal tuba with the Erie Chamber Orchestra and the Lake Erie Ballet Orchestra. He has served as President of the Pennsylvania Collegiate Bandmasters Association, and the Pennsylvania Chapter of Phi Beta Mu, Honorary Bandmasters Fraternity.  He has also served as the Pennsylvania state chair of the College Band Directors National Association.  He was the 2010 recipient of the Nu Chapter, Phi Beta Mu Bandmaster of the Year Award, and the 2013 recipient of the Allegheny College Julian Ross Award for Excellence in Teaching.